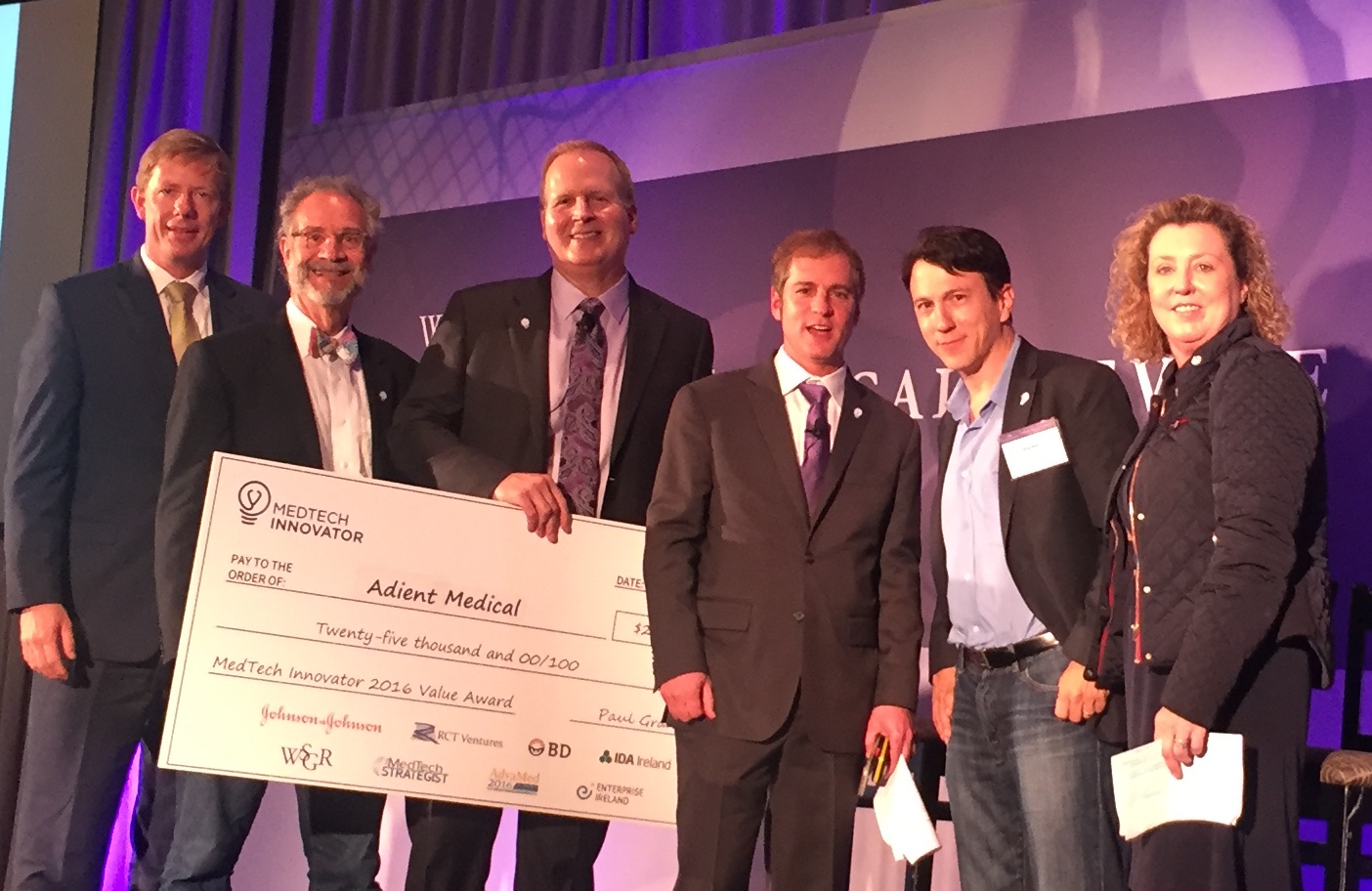 Los Angeles, CA (June 29, 2016) MedTech Innovator, the medtech industry’s global competition and virtual accelerator, announced today that Adient Medical is the winner of the global 2016 MedTech Innovator Value Award competition, the first of three awards that will be given this year. The other two awards in 2016 will be for Execution and Momentum, and the MedTech Innovator finals will be held October 19 at AdvaMed 2016. Adient Medical was selected in first place as the company with the most attractive value proposition by an electronic vote of the audience at Wilson Sonsini Goodrich & Rosati’s 24th Annual Medical Device Conference. As the first place winner, Adient Medical won a cash prize of $25,000 and will be profiled in an upcoming issue of the MedTech Strategist. The second place winner was Green Sun Medical. An industry selection committee chose Adient Medical, Green Sun Medical, SafeHeal, and Echo Labs to compete for the audience vote. Some of the sponsors of MedTech Innovator’s cash prizes include Johnson & Johnson, RCT Ventures, BD (Becton, Dickinson and Company), Enterprise Ireland, and IDA.

Adient is developing the first absorbable Inferior Vena Cava filter for the prevention of pulmonary embolism (PE). PE is the third leading cause for deaths in the U.S., and it accounts for 100-300 thousand deaths annually. The filter protects those at risk for PE by trapping blood clots destined for the lungs.

“We are both honored and humbled to have been chosen as the MedTech Innovator 2016 Value Award winner among so many inspiring medical technology companies”, said Mitch Eggers, Founder and CEO of Adient Medical. “The competing companies, chosen from across the U.S. and Europe, offer a plethora of products that will have lasting impact in medicine. The seminar sessions hosted by MedTech Innovator were valuable in honing our presentations, and providing the opportunity to mingle with potential investors and strategic partners. We even received inquiries after we returned home from investors that only attended the one hour award ceremony. Overall, it was a fantastic experience for emerging medtech companies.”

“Adient Medical’s absorbable IVC filter is a truly transformative technology with tremendous potential to improve patient outcomes and reduce costs, and I was thrilled to see them win the MedTech Innovator 2016 Value Award,” said Paul Grand. “The exposure provided by the MedTech Innovator platform is an incredible opportunity, as it directly engages key stakeholders from leading manufacturers, providers, and investors, and I expect that this will lead to opportunities for financing and industry partnerships for Adient and our other Semi-Finalists as they continue to compete in our program throughout 2016.”

MedTech Innovator’s mission is to accelerate the development of transformative innovations that benefit patients and deliver improved value to the health care system. MedTech Innovator 2016 features 20 Semi-Finalist companies selected from 430 applications that address one or more of the transformative themes identified in a 2016 survey of leading manufacturers and providers. The 2016 program includes three competitions: the first was April 13, 2016 at the Innovation in Medtech Summit in Dublin Ireland, the second was June 24, 2016 at the Wilson Sonsini Annual Medical Device Conference in San Francisco, and it will conclude with the finals at AdvaMed 2016 in Minneapolis, MN on October 19, 2016.